Inauguration of the center for the Siddharth-III linear accelerator

The Siddharth-III medical linear accelerator is the outcome of indigenization efforts of Indian scientists and comes to us as a gift from the Department of Electronics & Information Technology, Government of India. 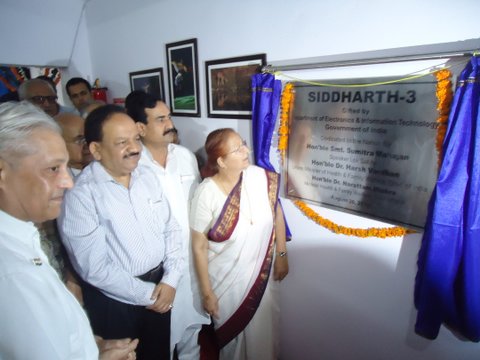 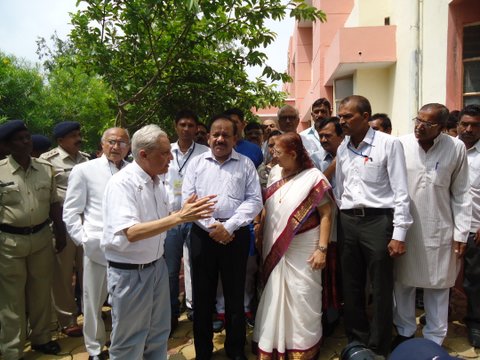 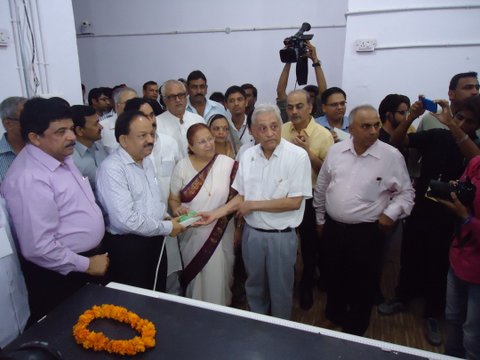 After the welcome by a military band, the Kainlee Pipers, the dignitaries were shown around the institute. Then came the formal inauguration with the unveiling of the plaque, cutting of the ribbon and pressing of the button to start the Siddharth-III. 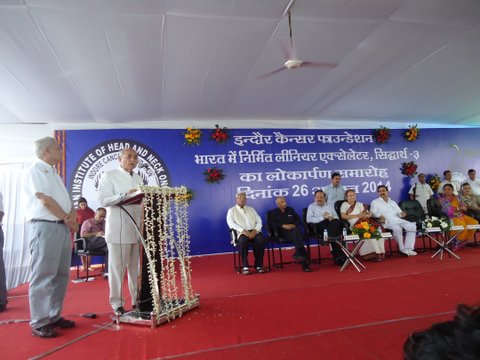 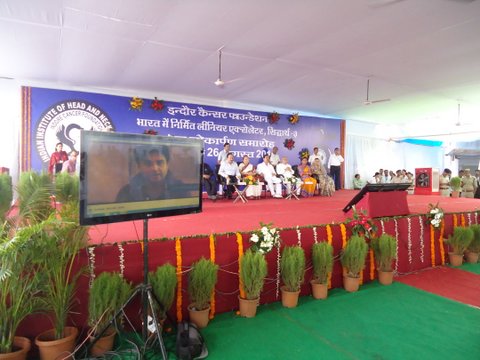 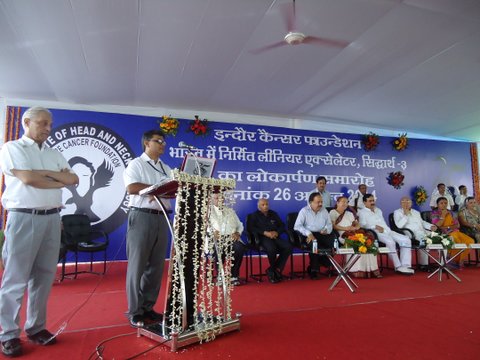 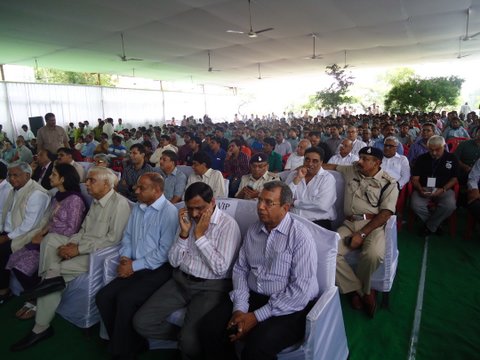 The respected guests were then escorted to where an audience, of over 500 people, who had witnessed the inauguration on CCTV, was waiting for them. 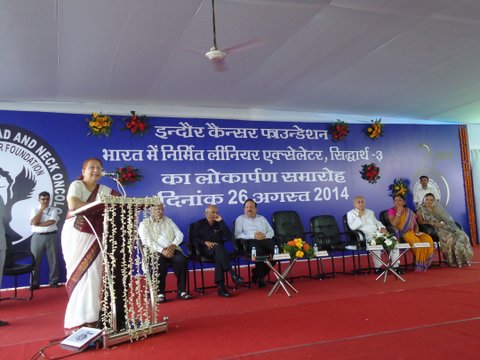 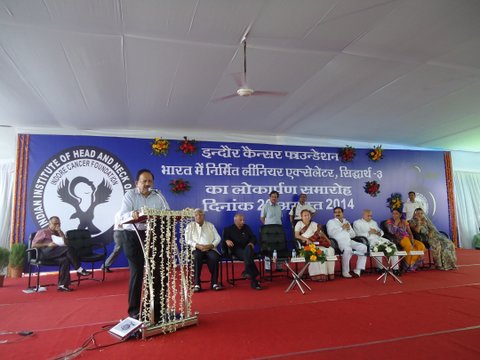 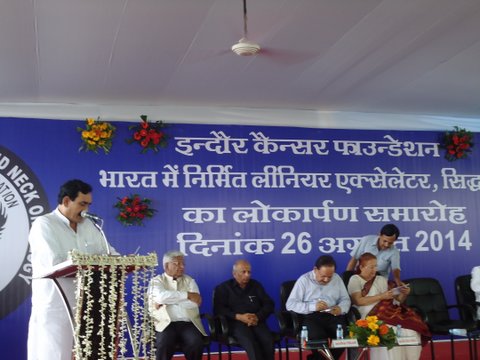 Dr. Narottam Mishra, Dr. Harsh Vardhan and Smt. Sumitra Mahajan then addressed the gathering. Their words of praise will motivate us to continue working with dedication and sincerity. 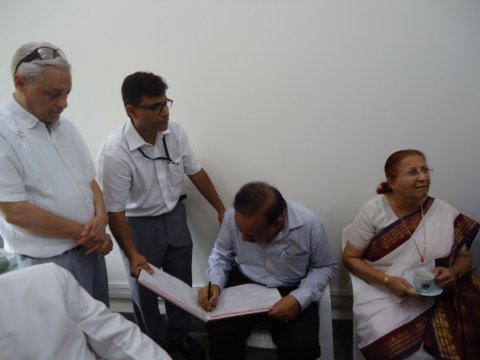 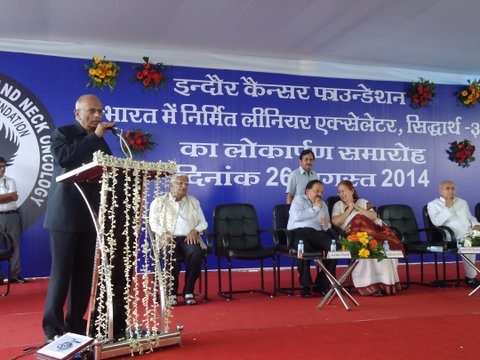 Excerpts from the speeches made, in Hindi, by Smt. Sumitra Mahajan, Dr. Harsh Vardhan, and Dr. Narottam Mishra

Mrs. Sumitra Mahajan, Hon’ble Speaker of the Lok Sabha… said that it was a matter of pride that Indore has received such a machine… She added that it was Jyotiradityaji who approved the gift of the Siddharth linear accelerator to Indore Cancer Foundation when he was Union Minister of State for Information Technology. Smt. Mahajan said that this was an example of doing whatever good possible when one is in charge of a department.

Today, people understand that if this machine has been gifted to the Indore Cancer Foundation then the poorest of the poor patient will also get treatment on it, if necessary free, people now do not need to be told this…

She hoped that hospitals in Indore achieve excellence so that the people of Indore and surrounding areas do not need to go to Mumbai and the best is available here itself.

Mrs. Sumitra Mahajan said that she had wanted Dr. Harsh Vardhan to come for this programme… to see for himself the work being done by Dr. Digpal Dharkar, for whom this is a mission…to see for himself that Indore also has dedicated officers, dedicated peoples’ representatives. She wanted Dr. Harsh Vardhan to see all this for himself. She expressed confidence that Dr. Harsh Vardhan’s visit would result not only in praise for the Indore Cancer Foundation but that his visit would prove to be comprehensively beneficial, not only for Indore Cancer Foundation but also for the entire health set up of Indore.

Concluding her speech by thanking the government of India for its gift of the Siddharth-III, Smt. Mahajan expressed confidence that Indore would get more such gifts and that the people of Indore would continue to give excellent services to the entire state…

The Union Minister, himself an ENT surgeon, said that first and foremost he would like to express heartfelt gratitude to Dr. Dharkar, on his own behalf, on behalf of his organization the Bharatiya Janata Party and on behalf of Government of India’s ministry of Health. Many doctors are doing good work but it requires a lot of resolve to move away from the comforts of urban life and for years work for the poor. It has the potential to inspire others in the medical fraternity, an occasion for them to learn how to make their lives more meaningful, an occasion to choose a new direction for their lives.

Dr. Harsh Vardhan said that he agreed to come for this programme because Respected Sumitra Mahajanji told him that there is a good doctor doing good work in her constituency and that he should attend this doctor’s programme. When he tried to find out about Dr. Dharkar, then as mentioned earlier, if anyone is working for years with a sense of service, commitment, dedication and devotion, then definitely such a person should be praised and encouraged in every way possible. And this was his reason for attending this programme.

The pain caused by cancer, especially oral cancers, that comprise 40% of all cancers in India, is something that he has seen from very close quarters…being himself a practicing ENT surgeon for the last 31 years…

That he has seen innumerable patients ignoring doctors’ advice or who did not have access to such advice… consuming various tobacco products, smoking cigarettes/bidis, drinking alcohol, destroying their own lives. Those who paid heed are saved and he has seen the suffering of those who did not… Many come when curative treatment is not possible… The unfortunate reality of India is that many have to sell their assets in order to get treatment.

…“According to the World Health Organization there are 11 million new cancer cases every year. In India, 7 million die of cancer every year.”

He believes that for the fight against cancer to be effective, all out efforts need to be made to protect our society from all the known causes of cancer. Indians must do research to identify the causes still not known and then work to protect our people from these as well. Improve treatment facilities. Along with this start a comprehensive, nation wide campaign to detect cancers in the earliest possible stage.

Dr. Harsh Vardhan mentioned that in this context, he was very happy to hear of Indore Collector Mr. Akash Tripathi’s initiative in planning a comprehensive district wide cancer screening programme… and congratulated Mr. Tripathi and Dr. Dharkar & his team for this laudable effort.

He lauded Government of India’s electronics department and its scientists… for the work done in developing the Siddharth linear accelerator that had just been dedicated to the nation by the Hon’ble Speaker. He added that it was only after coming to the institute that he learnt of the years of hard work put in by Indian scientists for indigenizing the linear accelerator… and whereas an imported unit would cost approximately Rs. 6,00,00,000/-, Siddharth will be available for Rs. 2,50,00,000/-… This will definitely benefit the people of India.

It is a terrible reality today that the advances in medicine… are so expensive… that they are beyond the reach of… even the average middle class Indian… and world-class medical facilities are accessible to only to a handful in India. That is why over the last many years, he has repeatedly said… that 80% of the people will benefit if efforts are made to strengthen preventive and positive health technology… Information on preventive measures must be widely disseminated…

Dr. Harsh Vardhan mentioned… that there had been 1 200 tobacco related deaths the world over in the 2 hours that he had been at the institute…

That it is unfortunate that the medical fraternity, social workers and teachers have not been able to wean people away from tobacco.

He complimented the state government of Madhya Pradesh… for being the 1st in the country to ban gutka that contains tobacco… A measure that has now been adopted in more than 28 states.

Dr. Harsh Vardhan shared the fact that the central government had increased the VAT on cigarettes from 11% to 72%… other than the fact that this should take cigarettes beyond the reach of many, the revenue thus collected over a period of 5 years… would be sufficient to develop 12 institutes like All India Institute of Medical Sciences New Delhi… institutes like this one that will protect the health of the people.

“Today, while congratulating Dr. Dharkar I want to say to everyone here…especially the doctors… that if after 66 years of independence we have still not been able to make ‘health for all’ a reality… then our life has not been meaningful. It is time for every one of us…to do out-of-the-box thinking, get out of the routine, make new resolutions for ourselves, dream new and difficult dreams and dedicate our lives to the achievement of those dreams. And I think that an excellent example of this is Dr. Dharkar…imagine his struggle…when he started 27 years back… going to the villages with no resources but only a dream with high objectives…this institute is the fruit of that struggle…he must have so much satisfaction… His dream is still incomplete and unwavering he is continuing to work towards it. He has dedicated his life to it.”

Dr. Harsh Vardhan appealed to everyone that they should not treat this as a routine programme but treat it as an inspirational opportunity to redefine their lives, make new resolutions. If this happens then this programme will be truly successful, effective in the real sense…

Dr. Narottam Mishra, Minister for Health & Family Welfare, Medical Education, AYUSH, Bhopal Gas Tragedy and Parliamentary Affairs, government of Madhya Pradesh, talked of the need for more effective presentation of the harmful effects of tobacco also more publicity for the same. Mentioned that the Madhya Pradesh government was the first to ban tobacco-containing gutka. Another way that the MP government has sought to curb the use of tobacco is by raising the VAT on it from 13% to 27%. Said that he is going to request the Chief Minister to do the same for all products containing tobacco. Requested the central government to also think of more and more ways to discourage tobacco consumption.