‘Development of a district based model for palliative care’ was the objective of the project proposed by us and approved by AUSAID, of the Commonwealth of Australia. The approach we adopted was to train the medical personnel of the government health system. Thus, enabling them to offer palliative care at the home of the terminally ill patient or at the health center close to his/her home.

The project started in April 1998 and the final programme was held in the first week of December 1999.

We selected Dhar for this project because it is a predominantly tribal area mainly dependent on the government for the delivery of health care.

The district of Dhar is divided into 13 blocks with approximately 2000 primary health workers, mid wives, social development workers, village level local body members, doctors and nurses. Our objective was to involve all these people and create a district level palliative care delivery system.

Given the huge number of health personnel in Dhar, it was impossible for our team to conduct the training programmes within a sensible time frame, without the support of additional trainers. The first step, therefore, was to train a select group of primary health workers as master trainers. 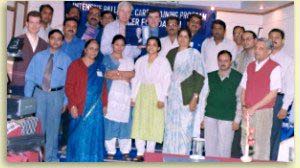 The 3rd tier was made up of doctors who received an exhaustive 10-day training in palliative care. These doctors were from the district health set-up and post training, they are equipped to work as independent palliative care consultants. They are, of course welcome to seek support from our faculty any time the need arises.

As a part of this project, a workshop on ‘Regional blocks for pain relief’ was also held. The workshop was conducted by Dr. Sushila Shah, President, Indian Society for Pain Relief, Mumbai, and her colleagues, Drs. Sharma and Gehdu, anaesthesiologists from the Tata Memorial Hospital, Mumbai. 50 doctors, most of them anaesthesiologists, attended the workshop. The faculty demonstrated pain block techniques on CTV (closed circuit television). Panel discussions and interactive sessions were also held.

It must be mentioned here that Dr. Robert Twycross’ guidance and contributions were invaluable for the successful conduct of this project.