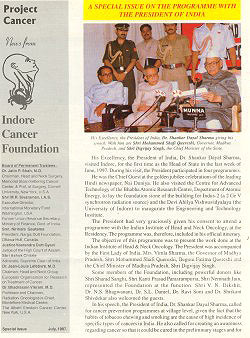 His Excellency, the President of India, Dr. Shankar Dayal Sharma, visited Indore, for the first time as the Head of State in the last week of June 1997. During his visit, the President participated in four official programmes, one of which was ours. The President had very graciously given his consent to see an audio-visual presentation on the Indian Institute of Head and Neck Oncology, at the Residency, on June 28, 1997.

Our objective was to present the work done at the Indian Institute of Head & Neck Oncology.

In his speech, the President of India, Dr. Shankar Dayal Sharma, called for cancer prevention programmes at village level, given the fact that the habits of tobacco chewing and smoking are the cause of high incidence of specific types of cancers in India. He also called for creating an awareness regarding cancer so that it could be detected in the preliminary stage when there are better chances for cure. The President lauded the work being done by us; i t was a red-letter day for our nascent Institute.

Mementos, of the Indian Institute of Head and Neck Oncology were presented to the President, the Governor and the Chief Minister. The programme was conducted by Dr. Govind Sharma.